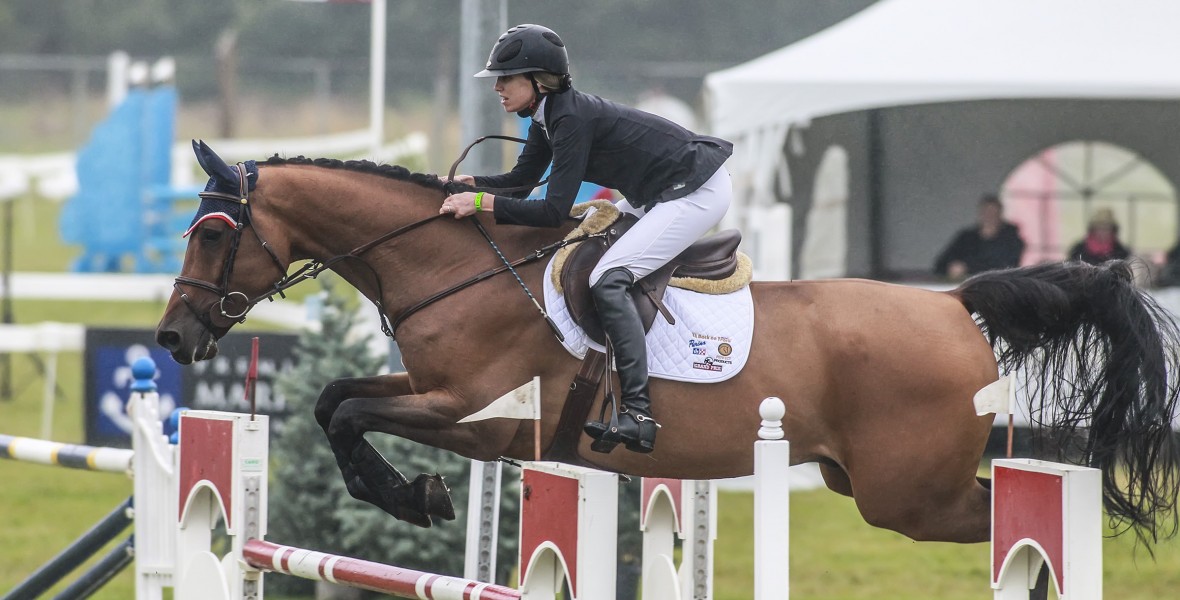 Produced by Hayes Co., the $50,000 CSI2* Zucarlos Grand Prix, presented by Kubota Canada and Stewart’s Equipment and televised on Rogers, was the featured event of the CSI2* Orangeville Show Jumping Tournament held from August 14 to 17 at the Orangeville Agricultural Society (OAS) Event Centre in Orangeville, ON.

A total of seven horse and rider combinations found their way to a clear round over the course set by Catsy Cruz of Mexico, setting the stage for an exciting jump-off. First to challenge the shortened jump-off track, Anna Gansauer of Ecuador ran into trouble at the final fence, leaving her with a total of six jumping and time penalties with Delgado Van’t Neerhoff.

Amy Millar was next in riding Heros, a seven-year-old Belgian Warmblood gelding (Canadian River x Clinton), for owners Millar, Matthews, and Irish Oaks. The pair was the first to leave all the obstacles in place, stopping the timers in 42.97 seconds. Although they moved to the top of the leader board, with five more to challenge, victory was far from guaranteed.

Angela Covert of St. Lazare, QC, had a rail in the combination with Utan while Erynn Ballard of Tottenham, ON, had the time, but brought down the final fence with Appy Cara. Olympic team silver medalist Mac Cone of King City, ON, had the misfortune of having the first fence down on course, but raced to the fastest time, 40.88 seconds, to eventually take third place riding Vannety B, a nine-year-old Belgian Sport Horse mare, for owner Silverbay Holdings Inc.

Beth Underhill of Schomberg, ON, guided Viggo to a clear round, but her time of 43.46 was half a second off the leading pace, leaving her in second place when the final challenger, Kelly Soleau of Marlborough, CT, was eliminated in the double combination with Centre Ice.

“I knew with my horse that he’s quick across the ground and turns well, so I made short turns and went a little bit in the places where you could open up and gallop,” said Millar of her jump-off strategy. “Mostly, I stayed short on all the turns. The horse is faster than he looks, and I think that fooled people a little bit, the fact that I didn’t look as fast as I was. I then went through the painful experience of watching everyone else come so close, but it was my lucky day and I got the win! There’s nothing better than that feeling!”

The win marked Millar’s first grand prix victory since 2009, when she won the $50,000 Grand Prix at the Caledon National tournament in Palgrave, ON, riding Costa Rica Z.

“He’s brand new to me, I’ve had him about six weeks, and he’s phenomenal!” said Millar, 37, who scaled back her competition schedule after having her daughter, Lily, now four. “He’s so scopey, brave, and easy-going. He’s a good match with me, and I’m really excited about our future together. It’s the horse I’ve been looking for for three years! I was very picky when I was shopping for this horse, and did not want to make a mistake. We were very lucky to find him, and some very nice people in Ann and Karen Matthews and Patty Overlund, helped me to have this opportunity. I’ve ridden a lot of horses, and it’s such a nice feeling to realize that you can just trust that the animal can do it.”

Of her time competing at the CSI2* Orangeville Show Jumping Tournament, the daughter of 10-time Canadian Olympian Ian Millar noted, “Jay Hayes and the organizing committee made the most of a terrible week of weather. It is a real pleasure to jump on grass. There are so few venues left that have grass footing. We don’t get to practice it much anymore unless we go to Spruce Meadows. But despite the conditions, no one in the grand prix lost a shoe and the horses jumped well.”

Another talented young female rider emerged victorious in the $10,000 Highland Meadows Modified Grand Prix held Sunday afternoon. Five riders from the 22-horse starting field jumped clear to advance to the tie-breaker. However, only two were able to repeat a fault-free effort in the jump-off with Michelle Vandal’s time of 31.84 seconds riding Travola eclipsing the time of 36.41 seconds posted earlier by Hyde Moffatt riding Carlo. As the final challenger, two-time Olympian Jay Hayes gave it a shot with Trish Crang’s Leonidas, but a rail down close to home left the pair third in the final standings.

To conclude this year’s CSI2* Orangeville Show Jumping Tournament, the Iron Horse Farm Jumper Parade of Champions recognized the outstanding performances at this year’s event. Asta Torokvei was the recipient of the M. Michael Meller Style Award while Amy Millar was presented with the Equifit Inc. Top Trainer Award.

“It was a fabulous event,” said Jay Hayes who, alongside his wife, Shawn, acts as the Co-President of the CSI2* Orangeville Show Jumping Tournament, supported by their three daughters Lauren, Ainsley and Regan. “Despite weather that made it feel more like October, the Orangeville grass ring stood up magnificently; I believe it’s the best natural ground of any event in Canada. It is true that horses really do like grass. In addition, the OAS has wonderful permanent infrastructure, it’s close to home, and the Orangeville area is so horsey and so supportive.

“We are very proud of Amy Millar for winning, followed immediately by Olympians Beth Underhill and Mac Cone,” continued Hayes. “We had a major league roster of competitors, and our sponsors and exhibitors are so supportive. We have a very large, positive, and ever-growing stable of sponsors, and we can’t thank everyone enough for making it a great event.”

For more information on the Orangeville Show Jumping Tournament, including the prize list and entry forms, please visit www.hayesco.ca or e-mail info@hayesco.ca.